I may be your resident Potty Time Specialist, but that sure doesn’t mean potty training came easy at our house. Quite the opposite, actually. Let’s just say it took so long that I had lots and lots and lots of time to learn a variety of methods. 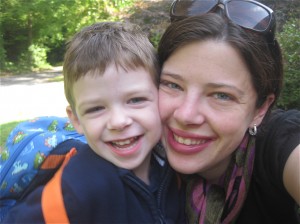 You see, my son Aidan is what they call “spirited”, downright energetic and more than just a little strong-willed (gee whiz, I have no idea where he could have gotten all that from!)

Anyway, what was most challenging about training him is that life is super-duper exciting to him, and there’s just so much interesting playing and running and jumping to do. To be bothered by struggling with cumbersome clothes and to “stop and go” at all was a concept he struggled with… a lot.

Ever so technically, he was trained by three, meaning he started preschool on his third birthday (and is thus convinced that school always starts on his birthday as a way to celebrate… boy is that going to be a bummer in the coming years). He was in his big boy undies from the start of school though, so that totally counts!

However, what I secretly knew was that he most certainly was not 100% trained. But he was always (almost) dry. How did I know this little secret? Simple. He dropped his trousers in public routinely. He rarely had an accident, but that’s only because he would stop playing only in the nick of time and drop his drawers wherever he might be.

This included, but was not limited to: The tee-ball field during a game, many parking lots, the vicar’s bushes at church, the bike rack at the library, and until I FINALLY taught him to look both ways and if he saw houses or cars to hold it, our front yard as traffic passed.

There was absolutely nothing to be done about this. Often it would happen so quickly I only had time to say “Nooooooo!” and dive to shield his little rear from view, and that was the best that could be done.

I figured that as his mom I was much more mortified about this than anyone else, and perhaps no one really noticed.

I was able to comfort myself with this little dream until the day I saw my friend take her son’s hand, dart behind the trash cans in the parking lot at school, and emerge a few minutes later shaking her head and laughing saying, “Well, we pulled an Aidan! My son just peed outdoors in public!”

He hasn’t pulled this public stunt himself in some time now. Thank goodness, because he’s started real school and I’m no longer there to run interference as often. He still has his “pee bush” (his name for it) in our backyard, but thankfully that’s secluded enough and doesn’t really count. Does it? 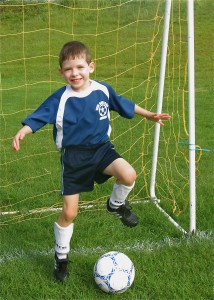