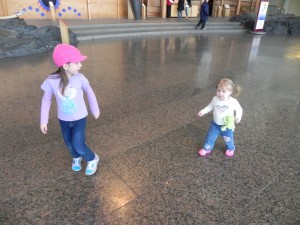 From early on, Evalyn took an interest in the potty time routines in our home. She was familiar with the signs of bathroom-related vocabulary thanks to the fact that we use American Sign Language in the house. So, she was taught and understood the terminology and was able to communicate it from infancy (6 months). Evalyn also had a wonderful role model in her older sister, Elizabeth. So, as the saying goes…monkey see monkey do.

Even though we felt Evalyn seemed cognitively prepared to start the official potty training process from a fairly young age, she still was not showing many of the physical signs of being ready yet: sitting still long enough, complaining when she was wet, holding her urine for more than two hours at a time, etc. So we took a laid back approach to her potty training; we followed her cues, and went “pretend” potty, read our potty books while sitting on the potty, and continued to model the potty time routine for her until we thought she seemed to be ready.

Everything was going great with this non-training approach, until the day she suddenly turned into a toddler, complete with the strong will, tantrums, and general mayhem.

“OMG!!! I think we must have missed the window,” I told my husband. “We may not get another chance to officially potty train her till she is passed this phase of her development – at least not without a whole lot of hair pulling, crying and frustration…on my part!” 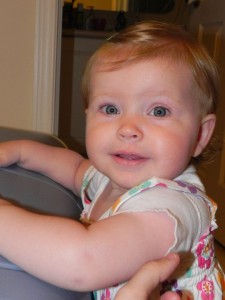 Evalyn as an early toddler

You see, my sweet, playful, very accommodating and patient infant had turned into one of those toddlers you’ve always heard about and seen, but were never your children.  What seemed like overnight, Evalyn had turned into the most willful child I had ever had the pleasure of keeping company with (note sarcasm here). This was a completely new experience for me because my first daughter never was that toddler. Over the years, I have had other spirited toddlers in my care as an Early Childhood Educator and from running  my daycare, but never in conjunction with potty training them.

So began a completely different potty training experience. We started having to follow her around, as she would run away when she had to go. Or every time we would try and put her on the potty, she would either cry or run away screaming “nooooooooo”. She also developed a fear of the sound of the toilet flushing, and an extreme anxiety to parting with her bowel movements as we attempted to empty them from her diaper into the toilet. She literally would freak out at the thought of having to flush it down the toilet, especially when….

Mommy and Daddy had the audacity to do this without asking her permission.  There really wasn’t any circumstance that had her feeling comfortable with the fact that she had to let her bowel movements go, never to be seen again.  I can’t even tell you how much Tylenol my husband and I purchased and consumed in that time due to all the crying, screaming and tantrums…and this time these emotions were all Evalyn!  We had to deal with this behavior for six long months, until Evalyn hit her 2nd birthday.  Then came a whole new level of un-cooperativeness….but I’ll save that for part 2 of my series.